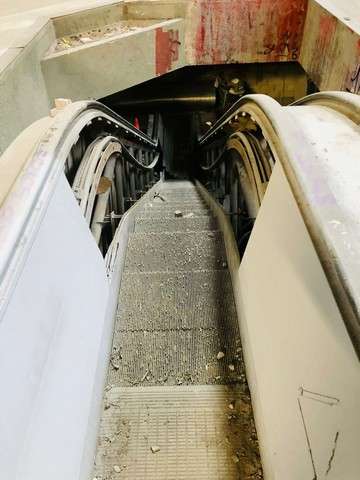 Photo: A dead escalator inside of the Hawthorne Plaza-a mall that has remained vacant for nearly 23 years in Hawthorne, CA.

Do Malls Stand a Chance Post-Pandemic?

During the COVID-19 shutdown in April 2020, like other businesses, malls were hit hard. Shopping malls were already seeing a decrease in in-store shopping before the pandemic due to e-commerce sites like Amazon, Wayfair, and eBay. Enter a global pandemic, and it would almost certainly create a recipe for failure-or so we thought.

What the pandemic actually did was make malls more innovative and adaptable-much like many other businesses, the pandemic forced malls into a new lease on mall life. People and businesses alike have had to become more adaptable and accommodating to make businesses work-and malls haven’t missed a beat.

Shopping malls have been employing a mix-use type of setting for years and keeping up with that mix-use style has proven beneficial-adding big restaurants, trampoline parks and other large attractions to keep up with the need and demands of consumers has increased traffic. The goal is to draw the customer in with the big attractions and anchor stores, like Macy’s and Nordstrom, with the hope that shoppers will naturally wander into the smaller stores since they are already there. MainPlace Mall in Santa Ana, CA added an American Ninja Warrior Adventure Park-inspired by the popular T.V. show-in July, and it is seeing a 19% increase in traffic-higher than pre-pandemic traffic, in 2019.

Other malls have added fine dining and luxury stores to make the malls more of an experience than a chore. According to the Orange County Business Journal, the South Coast Plaza in Costa Mesa, CA is ranked #1 in the Orange County area with $2.4 billion in taxable sales in 2022. With the Segerstrom Center for the Arts and fine dining within South Coast Plaza, it is a prime example of how mix-use malls draw more traffic than malls without these bigger attractions. The South Coast Plaza will go as far as not to refer to itself as a mall, but rather as a "luxury shopping center”. Adding big designer names like Balenciaga, Gucci, Valentino, and Versace, to name a few, has placed the South Coast Plaza in a class of its own.

One need not look further than just beyond county lines to see what can happen if a mall does not change or grow to align with the times. Hawthorne, California-best is known for being the home of the Beach Boys, and now SpaceX-was a booming little city in the 1970s. The “City of Good Neighbors” located just 5 miles Southeast of the LAX Airport, is part of the South Bay area of Los Angeles with neighboring cities of Gardena, Inglewood, El Segundo, Redondo Beach, and Manhattan Beach. Known for its aerospace presence, Hawthorne was once a coveted part of Los Angeles.

In 1977, The Hawthorne Plaza opened its doors as the only major shopping center in the heart of the city. Located on Hawthorne Blvd., the 1 million sq. ft. mall was home to 134 stores with anchor stores like JC Penney, The Broadway, and Montgomery Ward. The mall closed its doors on March 1, 1999, and has remained abandoned since. You read that right-the mall has stood for nearly 23 years without being redeveloped.

“The mall closed in 1999 due to a lack of customers. After Northrop left Hawthorne, the aerospace presence diminished, and Hawthorne went into a steep decline,” says City of Hawthorne Interim Planning Director, Gregg McClain.

According to McClain, the city of Hawthorne approved previous requests for redevelopment by Hawthorne Plaza Owner and commercial real estate developer, Arman Gabaee— known professionally as Arman “Gabay”. Gabaee-a co-partner for the Charles Company-bought the mall in 2000 and according to city officials, his company has made no developments to the building aside from leasing a portion of it to the Los Angeles Welfare Department.

The big question is WHY hasn’t the Charles Company executed their proposals to redevelop the mall? According to the Justice Department, Gabaee faced legal troubles in recent years, agreeing to plead guilty to bribery charges in April, where Gabaee reportedly used monetary bribes with a Los Angeles County public official to secure a $45 million lease. Now, Gabaee is currently being sued by the city of Hawthorne for failing to redevelop the mall.

“The mall is an anchor that is holding back commercial diversity. The city has been very flexible, so it’s not on the city,” added McClain, who says that the 1 million sq. ft. that the mall sits on could be used to improve commerce in Hawthorne.

According to McClain, the City of Hawthorne could be thriving like its sister cities, but the abandoned building on Hawthorne Boulevard is instead used as an apocalyptic background for movie sets-a very somber reality of what can when malls fail to redevelop.

For those who may not be aware, big shopping centers like malls can be a major source of city revenue that can impact the city’s economy-especially in small cities, like Hawthorne and Brea. It is important to compare apples to apples in the case of the Hawthorne Plaza and the Brea Mall because of the huge impact these malls have and have had on their respective cities. Hawthorne-6.23 sq. miles and a population of 86, 091-has an abandoned mall just sitting in the middle of the city; a prime piece of land that is churning out zero dollars in annual sales tax.

Brea-with half the population of Hawthorne at 47,589 and double the size at 12.21 sq miles-houses the Brea Mall, which sits on just over 1.3 million sq. ft. in the heart of Brea. The Brea Mall brings in an estimated 631.4 million in taxable sales per year, according to the Orange County Business Journal. This sends millions of dollars back into Brea, funding departments like police, fire, community development, and management services among others. The kind of funding that Brea receives from the Brea Mall could drastically help a city like Hawthorne, where there is a major disparity in community services, especially for youth.

Brea Mall owner, Simon Property Group-an internationally renowned mega mogul in the mall development world- has proposed an innovative plan to redevelop the Brea Mall, adding additional retail stores, restaurants, a greenery area, and affordable housing units, which again speaks to the idea that malls must remain ever-evolving to keep up with consumer needs and interests. The proposed project would add 47,425 sq. ft. of gross leasable area. As the population grows, cities must grow. Brea has gained over 7,000 new residents within the last 10 years alone, mandating upgrades in housing and amenities to support that growth.

The Fate of the City

In short, redevelopment is necessary for a city’s future. There will always be kinks that need to be worked out with redevelopment proposals, but if malls don’t grow and adapt to the economic demands, the outcome can be devastating to the community-much like Hawthorne. As you read this article, the Hawthorne Plaza is taking up 1 million sq. ft. of nothingness. Once the biggest shopping center in Hawthorne, the Hawthorne Plaza is now only a shell of what once was, contributing nothing to the city or the community.

McClain added that zoning is in place to build, the city has made every effort to move forward with the plans to redevelop as the city of Hawthorne understands the detriment of the blight on the boulevard, but it remains to be seen whether or not the Hawthorne Plaza will stand for another quarter century while Hawthorne’s economy remains deprived. It would be a shame for another city to fall by the wayside as Hawthorne has.

When asked what the city of Hawthorne would like to see happen to the Hawthorne Plaza, McClain stated, “…a commercial or mix-use project. Ideally, a development where the site is opened up and engages the boulevard. We are open to innovative and creative solutions that will re-energize downtown and be a catalyst for economic development.”

We use cookies on our website to give you the most relevant experience by remembering your preferences and repeat visits. By clicking “Accept”, you consent to the use of ALL the cookies.
Cookie settingsACCEPT
Manage consent

This website uses cookies to improve your experience while you navigate through the website. Out of these, the cookies that are categorized as necessary are stored on your browser as they are essential for the working of basic functionalities of the website. We also use third-party cookies that help us analyze and understand how you use this website. These cookies will be stored in your browser only with your consent. You also have the option to opt-out of these cookies. But opting out of some of these cookies may affect your browsing experience.
Necessary Always Enabled
Necessary cookies are absolutely essential for the website to function properly. This category only includes cookies that ensures basic functionalities and security features of the website. These cookies do not store any personal information.
Non-necessary
Any cookies that may not be particularly necessary for the website to function and is used specifically to collect user personal data via analytics, ads, other embedded contents are termed as non-necessary cookies. It is mandatory to procure user consent prior to running these cookies on your website.
SAVE & ACCEPT